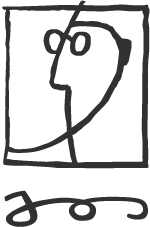 Jos is famous because he works with a combination of fun, endless energy and unlimited thinking. Jos has thought of more than 250 word jokes regarding his name in the past years. We keep it with jos® for the moment ;-).

Jos Studied at the Art Academy and started as an interior architect in the middle of the 80’s and attracted success immediately. He designed many interiors under which a lot of optical businesses. He recognised quite quickly that it was hard to find any optical frames by dutch designers. Time for a change!

It is important for Jos to tell a story with his frames and even more important that your frame becomes part of your story! With a Jos, you have more than just a frame, all his creations are eccentric, have an own identity and above all, are comfortable to wear!

Our vision is powerful and simple: an eye for detail and high quality instead of quantity! That is why Jos® can only be found at the better independent optical stores.

Apart from frames, there are also Jos® watches (jos-timedesign) Jos® belts (You’re belt 2-gether by jos) and other fashion accessories available and upcoming (look forward to it!).

Both in Holland and outside we are very active. The international catwalk has also met Jos® through the years: New York Fashionweek, Cannes Fashion Festival and The International Fashion Fair in Shanghai have been overwhelmed by  Jos® and we are more than proud because of this!

HOW does a JOS come to life!
Scroll to top

This site uses cookies. By continuing to browse the site, you are agreeing to our use of cookies.

We may request cookies to be set on your device. We use cookies to let us know when you visit our websites, how you interact with us, to enrich your user experience, and to customize your relationship with our website.

Click on the different category headings to find out more. You can also change some of your preferences. Note that blocking some types of cookies may impact your experience on our websites and the services we are able to offer.

These cookies are strictly necessary to provide you with services available through our website and to use some of its features.

Because these cookies are strictly necessary to deliver the website, refuseing them will have impact how our site functions. You always can block or delete cookies by changing your browser settings and force blocking all cookies on this website. But this will always prompt you to accept/refuse cookies when revisiting our site.

We fully respect if you want to refuse cookies but to avoid asking you again and again kindly allow us to store a cookie for that. You are free to opt out any time or opt in for other cookies to get a better experience. If you refuse cookies we will remove all set cookies in our domain.

We provide you with a list of stored cookies on your computer in our domain so you can check what we stored. Due to security reasons we are not able to show or modify cookies from other domains. You can check these in your browser security settings.

These cookies collect information that is used either in aggregate form to help us understand how our website is being used or how effective our marketing campaigns are, or to help us customize our website and application for you in order to enhance your experience.

If you do not want that we track your visist to our site you can disable tracking in your browser here:

We also use different external services like Google Webfonts, Google Maps, and external Video providers. Since these providers may collect personal data like your IP address we allow you to block them here. Please be aware that this might heavily reduce the functionality and appearance of our site. Changes will take effect once you reload the page.